What are tin whiskers and why is it a problem?

A lot has been talked about tin-whiskering and the way it could lead to problems in different electronic components, this especially if the ICs are deployed in high reliability environments such as avionics, and harsh environments such as oil rigs deployed deep sea.; where failure is not an option.
But what are Tin Whiskers?
Tin whiskers are electrically conductive, crystalline structures of tin that sometimes grow from surfaces where tin (especially electroplated tin) is used as a final finish.

What are the mechanisms by which Tin Whiskers form?
The mechanisms by which tin whiskers grow has been studied for many years. But unfortunately no single, widely accepted explanation of this mechanism has been established. But there are certain agreed factors in tin whisker formation. Tin whisker growth is primarily attributed to stresses in tin plating; the stresses may be from various sources which include :

– Residual stresses in the tin resulting from the plating process.
– Electro deposited finishes are considered most susceptible due to stresses built into the finish as a result of the plating process.
– Formation of intermetallic compounds especially within the tin grain boundaries.
– Compressive stresses such as those introduced by torquing of a nut or a screw.
– Bending or stretching of the surface after plating
– Scratches or nicks in the plating introduced by handling.

What are the commonly reported characteristics of Tin Whiskers?
The vast disparity in the observations reported by different experimenters is evidence of the complications associated with understanding and controlling tin whiskers. The following provide a very basic overview of some of the observed characteristics of tin whiskers.
Whiskers may be straight, kinked, hooked, or forked. Their outer surfaces are often grooved. Some growths may form as nodules or pyramidal structures. 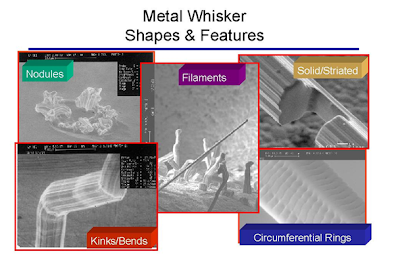 All of the above characteristics have been known to cause problems, for example causing a short circuit in a satellite leading to blacking out of several important services. Therefore it is very important to understand tin whiskers and work on a solution that leads to tin whisker mitigation. A solution that has worked for mitigation for tin whiskers is re-tinning of components.
Source : Retronix Blog, Sept’13